Mountain Mama
To see the soul of your comrade listen carefully to his music.

I think this just may be the best pro-life message I’ve seen.
A Point well made!!!

A worried woman went to her gynecologist and said, “Doctor, I have a serious problem and desperately need your help! My baby is not even 1 year old and I’m pregnant again. She said, “I want you to end my pregnancy, and I’m counting on your help with this.”
The doctor thought for a little, and after some silence he said to the woman, “I think I have a better solution for your problem. It’s less dangerous for you too.”
She smiled, thinking that the doctor was going to accept her request.
Then he continued, “You see, in order for you not to have to take care of two babies at the same time, let’s kill the one in your arms. This way, you could rest some before the other one is born. If we’re going to kill one of them, it doesn’t matter which one it is. There would be no risk for your body if you chose the one in your arms.”
The lady was horrified and said, “No doctor! How terrible! It’s a crime to kill a child!”
“I agree,” the doctor replied. “But you seemed to be OK with it, so I thought maybe that was the best solution.” The doctor smiled, realizing that he had made his point. He convinced the mom that there is no difference in killing a child that’s already been born and one that’s still in the womb. The crime is the same!
Learn from Yesterday, live for Today, hope for Tomorrow.
“Love says I sacrifice myself for the good of the other person. Abortion says I sacrifice the other person for the good of myself.” 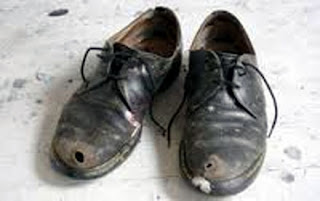 Growing up in the 40's during war time and for a time afterward, shoes were hard to come by. If I remember right ration stamps had to be used for one pair a year. Kids feet grow faster than that so it wasn't unusual to see holes in the toes of the serviceable oxfords we wore. By the end of the school year the toes were often cut out so growing toes weren't cramped. I hated the oxfords and longed for pretty sandals like I saw in the sears and wards catalogs, but that was only a dream. I still remember how those new leather oxfords smelled. PU! They smelled just as bad new as they did after I wore them for a year! 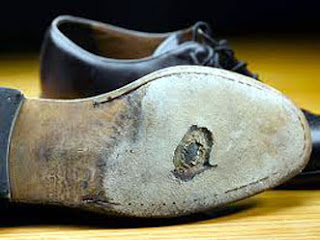 Yep, our shoes often got holes on the sole. Stepping on a sharp rock was painful enough to make a little girl say a bad word too. We cut pieces of cardboard to fit inside the shoe for protection but it wore through fast and if it rained it was ruined. Another dilemma was when the stitching on the sole wore out which it usually did. Every step we took caused the loose sole to flop making a telltale flap-flap with each step. I remember trying to hold it in place with a rubber band but it didn't last long. 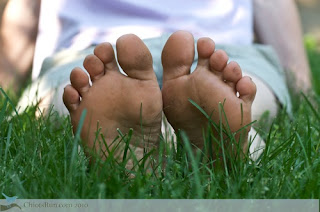 Summertime was barefoot time. Oh how those cramped toes loved the freedom to wiggle in the fresh air, and feel the cool grass. We had fields to run in and trees to climb, a polliwog pond to wade in, and the soft soil in mom's garden to sink in up to our ankles. Oh my, life was so good to our feet in the summertime!  We got some cuts and stubbed toes but after some doctoring, we were right back out there running like new fawns in a meadow.
Well.... that is until I had the misfortune of catching a snake between my toes. That was bad enough but the slithery thing wrapped it's tail end around my ankle to get a better grip so it could bite me to death. Well, at least that's what I thought back then. I remember rolling on the ground screaming like a banshee till dad came running to save me. He saw what was troubling me, pulled the thing off my foot after he was able to catch my leg which was kicking in more directions that I have joints. Hindsight: if that snake had let go my foot it could have fallen on my face. If that had happened I would not be here to post this. Dad carried me to the house where I cried and shook for a long long time. I have been terrified of snakes since then.

I know we carry childhood issues throughout our lives. I suppose we all have some little thing that has stayed with us.

Now about the shoes. I remember in the 50's having some pretty ones. I loved the black velvet ballerina slippers that tied at the ankle, and the Joycies, I even liked the penny loafers and saddle shoes and when white bucks were the fad I adored mine. I still remember how proud I was to wear my first high heels! I think the heels were two inches high and I also wore my first garter belt and nylons, the kind with the seam up the back, without the pantie part. That was separate. It was at my 9th grade graduation and I thought I was really grown up. HAHAHA

Well I still like shoes and recently decided to take inventory and found over 60 pair.  I parted with a few bags of them but still have too many. After all, I only have two feet. 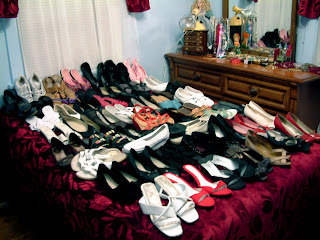 It's time to get out the sandals
HAPPY SPRING EVERYONE!﻿